In the wake of the racially laden audio recording of LA Clippers owner Donald Sterling that surfaced last week, the NBA’s commissioner handed down a lifetime ban from the team, in all aspects, and he was also fined the sum of 2.5 million dollars.

I created this image in response to the news of the punishment handed down (note: for those who do not speak Spanish, the word pendejo means stupid)
Something for Time magazine to consider, a Pendejo of the Year edition to complement the Person of the Year one. One can only hope lol. 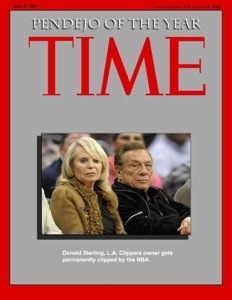