Fall Review came and went. It wasn’t as brutal as I thought it was going to be…well, that is if you walk in there with the intent of defending your art and what/who/how you draw your inspiration from. Walking in there with no clue how to answer some of the basic questions is suicide. You’re going to get ripped to shreds. I didn’t go too much into detail, just the facts ma’am as Sgt Joe Friday would say in Dragnet. So apparently they picked one piece from everybody who did the review to be shown tonight at a show with the chosen pieces on display. Pretty kewl indeed. Anyway, so there were plenty of people there oohing and aahing over some of the works, including several professors. I later found out that there was a scoring system during the review. About a dozen people were on a list that was put up with the highest scoring reviewees. I believe the lowest on that list was an 8.2 and at the top a 9.8. It makes sense now, since I remember seeing one of the judges scribbling on their paper a few notes and then a 7. 7 out of 10 isn’t that bad…actually, that’s pretty good. So good in fact that after walking around and speaking with a few people and a professor, we went to celebrate. Surprised Ana with a dinner at this French restaurant, err, bistro? same difference. It’s on Miracle Mile called La Provencal. Damn good food. Anyway, it was a pretty good evening. Still have a few more weeks before the semester ends…and then? Freeeee! 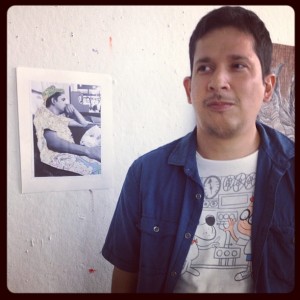 Me and the chosen piece